Seeing as I am relatively new to building layouts, my primary Main Layout on this blog is firstly a test, a spring board if you will, into trying new techniques and ideas. As a result, and unlike many serious model railway layouts you may find, it doesn't have a theme, and it is not era or location specific. It may as well be called Somewhereville, although I'm not American so It'll more likely be called Nowherechester, Anywherington  or something equally British sounding. But that's OK, it's a place for me to appreciate the trains I like rather than their setting.

Now I'm doing my side project, my shelf layout, I can start to explore the idea of giving it a theme, a setting and maybe an era.

Reminding you of my layout plan, we have:

Most modellers base their layouts loosely on an actual location. (See Tanglewood Common in previous Episodes). It would be easy to set this layout in a rural location. The small station with single platform would work, as would a little freight yard for arriving goods and departing local farm yard produce. A real location would be somewhere like Sudbury or Ongar (pictured above).

This would however involve landscaping a tunnel for the out of sight fiddle yard. In such a confined space such as this layout this may look odd and indeed prove difficult to pull off. Let's remind ourselves where I'm actually up to in the design... 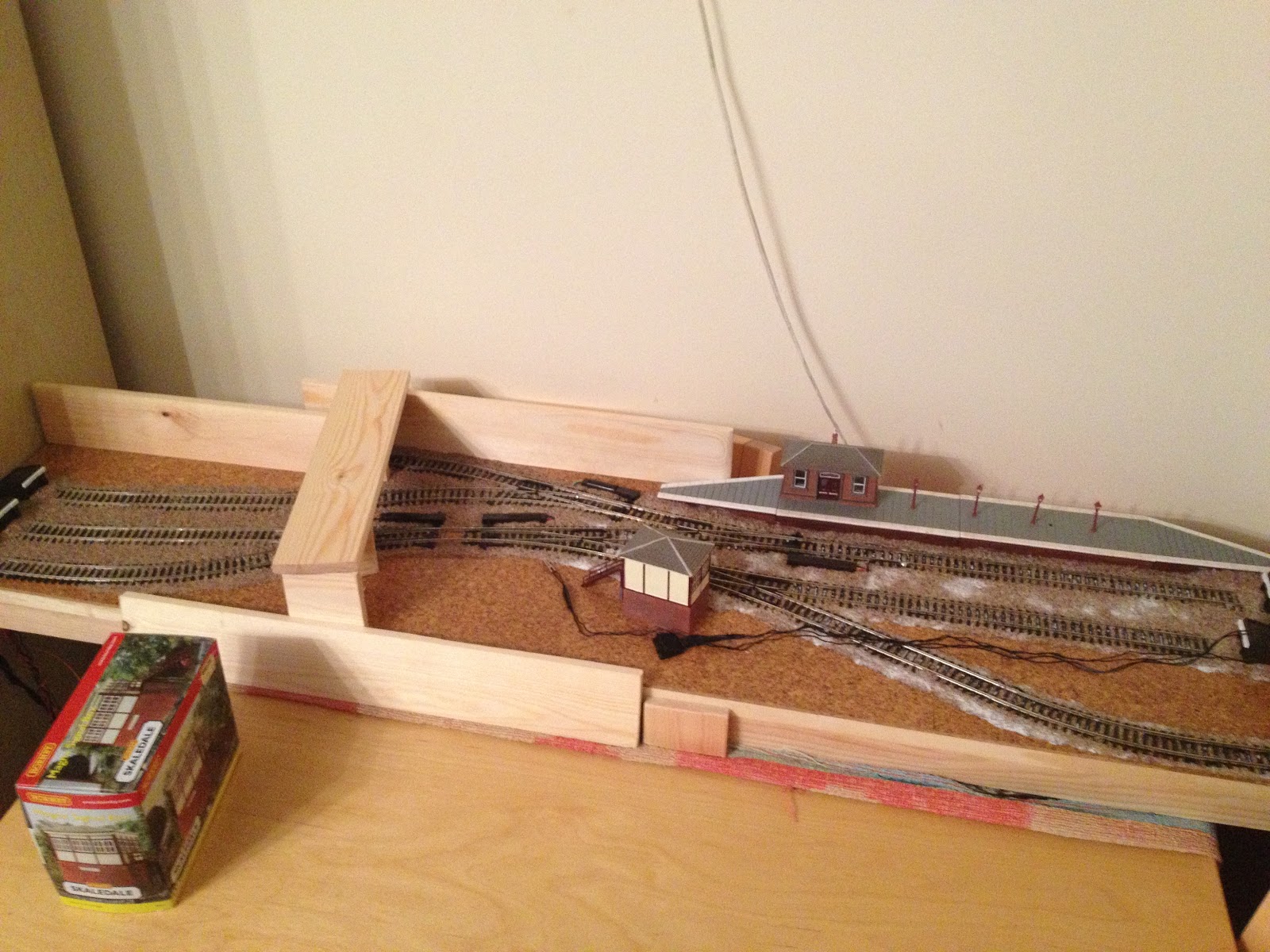 Instead of landscaping a grass bank and tunnel portal, I found it far simpler to use strips of wood that will form walls. A further strip of wood bridges the yard which will later become a road. This both forms the 'tunnel portal' effect to the out of sight fiddle yard (at the top) and acts to add an interesting height layer to the layout.

This changing things. Because the road bridges the yard and creates a tunnel underneath it, we are implying the layout is in a cutting, where the road 'bridge' is actually ground level. This coupled with the use of the wood as walls to me implies more of a built up location. Still plausible for passenger services but this time we'll turn to industrial style traffic for freight rather than farmyard produce. There are no shortage of city stations built into cuttings. Exeter Central (above top), London Liverpool Street and to some extent Huddersfield (above bottom).

But the problem with these stations is that they are quite large, and in most cases are through routes. There's certainly Colchester Town (above top) and Wrexham Central (above bottom). Both of which have managed to stand the test of time despite having much larger through stations in their wake. I like the idea that my station is competing with (in the steam era) or struggling to survive (in the modern era) against larger city stations. These examples are not in cuttings, sure, but we've got ideas to work with now.

The other thing I want to think of is the architecture of the setting. I've already chosen a couple of buildings which you can see in the above picture of my layout from the Hornby Magna range.

Despite Ashby Magna (of which they are based upon) being in Leicestershire, there is something very 'Manchester' about the their red brick facades.

Anyone from or has ever been to Manchester and it's surrounding areas will notice that pretty much everything, and I do mean everything, has been built out of red brick. This I have always felt contrasts starkly to the stone structures found in neighboroughing Yorkshire and gives it a very distinct characteristic. Here's a picture of the abandoned Manchester Mayfield station for example...

Manchester is a good place to pick for a setting. It's steeped in an illustrious rail history. The first inter-city passenger service in the world started here in 1830 in the form of Manchester Liverpool Road on the Liverpool and Manchester Railway. To cater for Britain's main industrial city, Manchester Mayfield, Oldham Road, Central and Exchange, all now defunct termini, would have served alongside the now glistening Piccadilly (formally London Road) and the not so glistening Victoria stations. Not to mention Oxford Road, Deansgate, Salford Central and Salford Cresent as well.

Those of you with a keen knowledge of Manchester's rail network will realise most of it runs elevated on viaducts through the city. That's fine, we'll just have to develop a slightly different back story for our layout that sets it in a cutting rather than on a viaduct.

So without further ado I present the fictitious location of my layout... 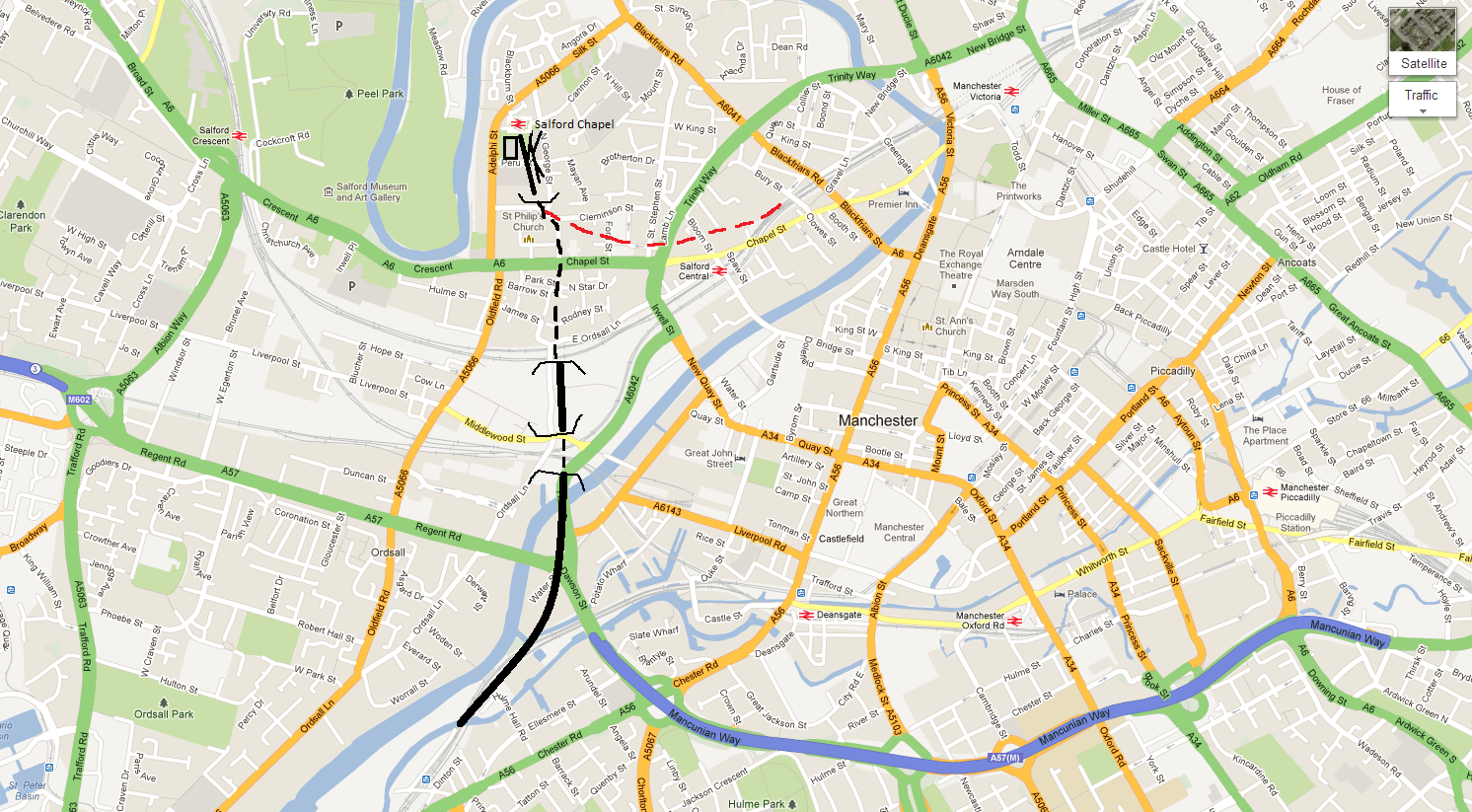 From the south, a line diverges from the viaduct of the former London Midland lines into Manchester Central & through routes to Piccadilly and Yorkshire. It runs northwards over the River Irwell and dips underneath the Manchester to Liverpool line most likely in the place of the A6042. Tunnelling under Ordsall Lane and Chapel Street, the line arrives in the industrialised Blackfirars/Eastern Salford area of the city, just to the north of St Phillip's Church. The station would probably  sit in the spot the University of Salford's Centenary Building now occupies. A link line may also exist feeding into Victoria towards the north and east of the city.

I have given the station the name 'Salford Chapel.' Perhaps it takes it's name after Chapel Street just to the south (similar to the theme of naming stations after roads in the city - Oxford Road, Liverpool Road, London Road etc.), or perhaps in reference to St Phillip's Church... you decide!... It also nicely sits with the theme of both existing Salford stations starting with the letter 'C'.

In my mind, despite its proximity to others stations, it has survived for providing this area of Salford with a link southwards whereas lines in the area only serve westwards out of the city.

How BR name boards may have looked...

Or on modern Northern Rail branding.