Episode 12: A Side Project

As you may be aware I’ve been toying with the notion of a side project, based upon the inspiration of some of Epping Railway Circle’s end to end (or shelf – this will become an important word later on) layouts, like this one… 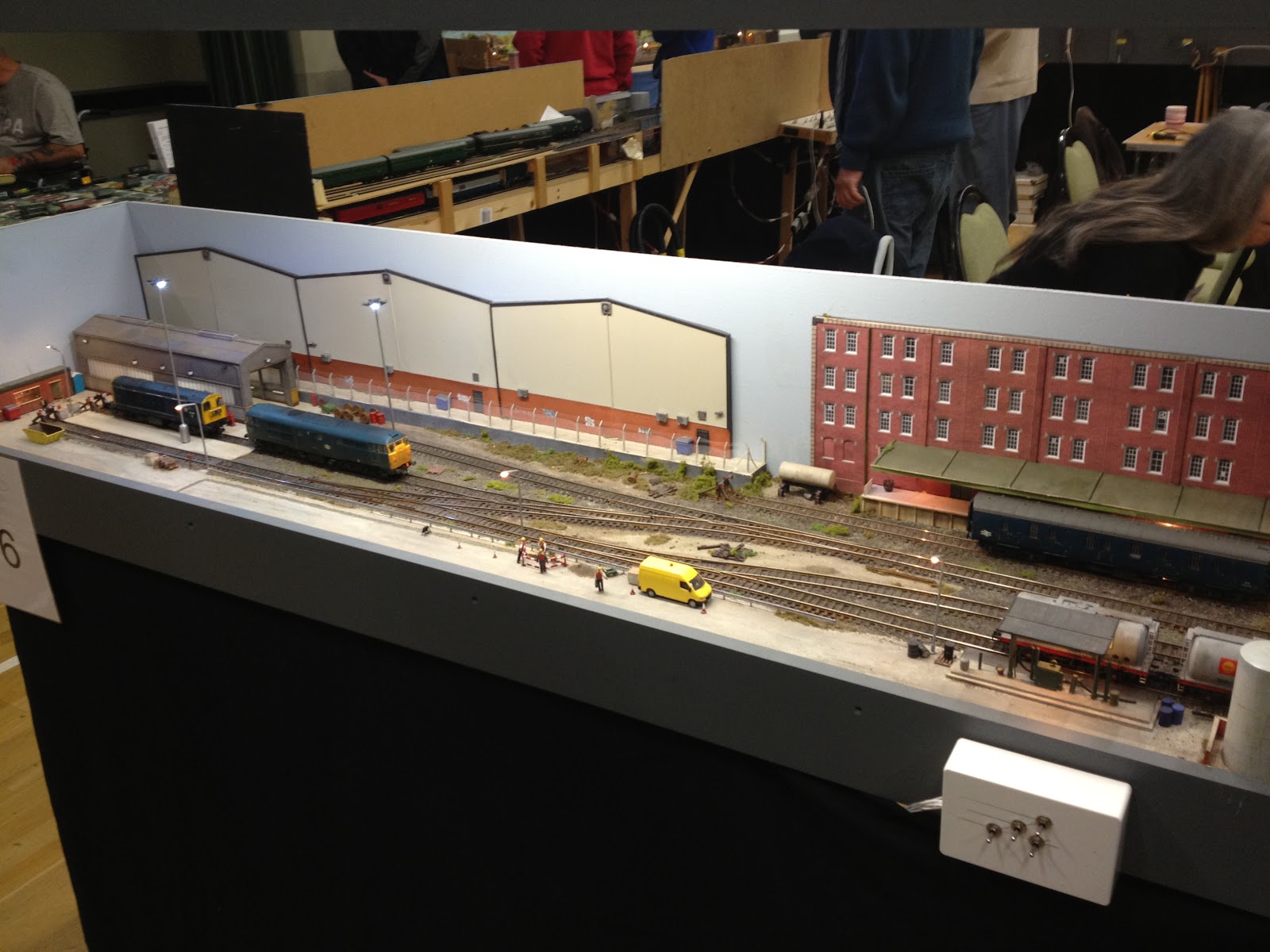 So far my current layout has developed from concept… 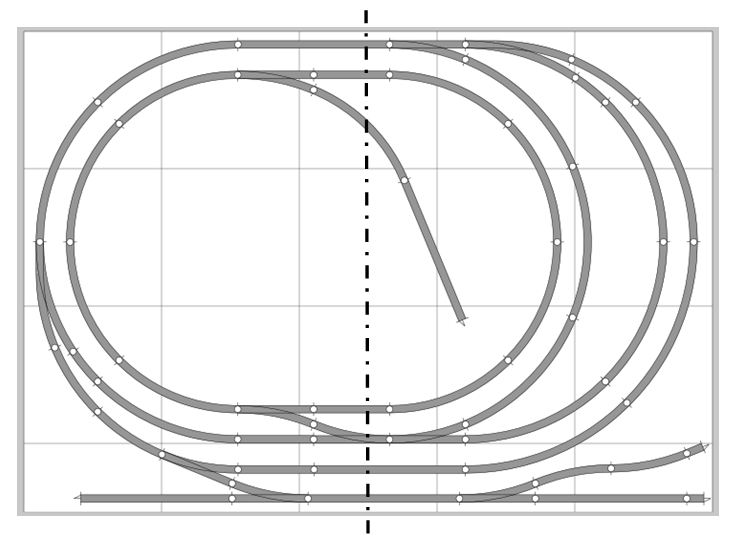 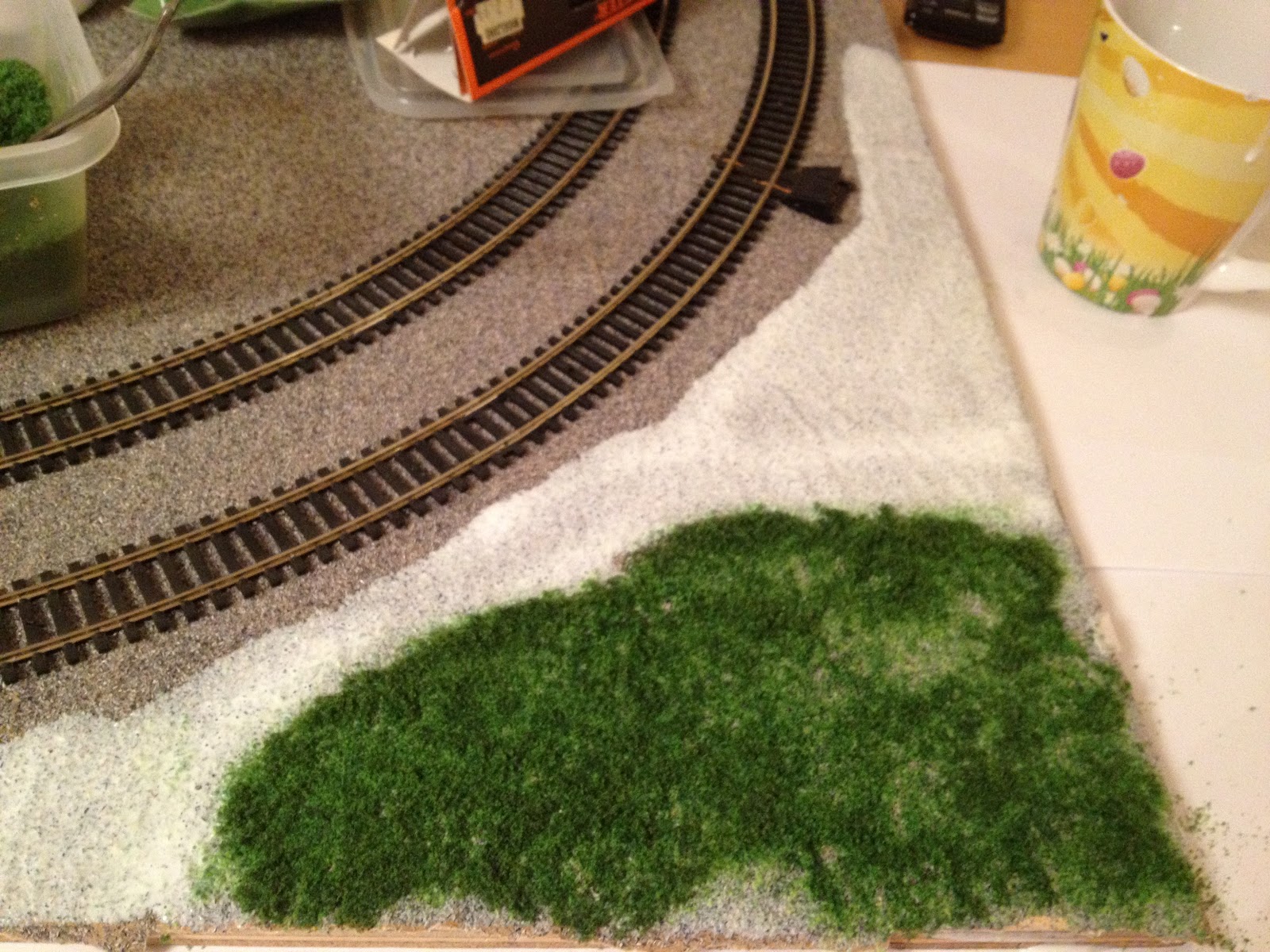 To something that really is starting to look rather good. 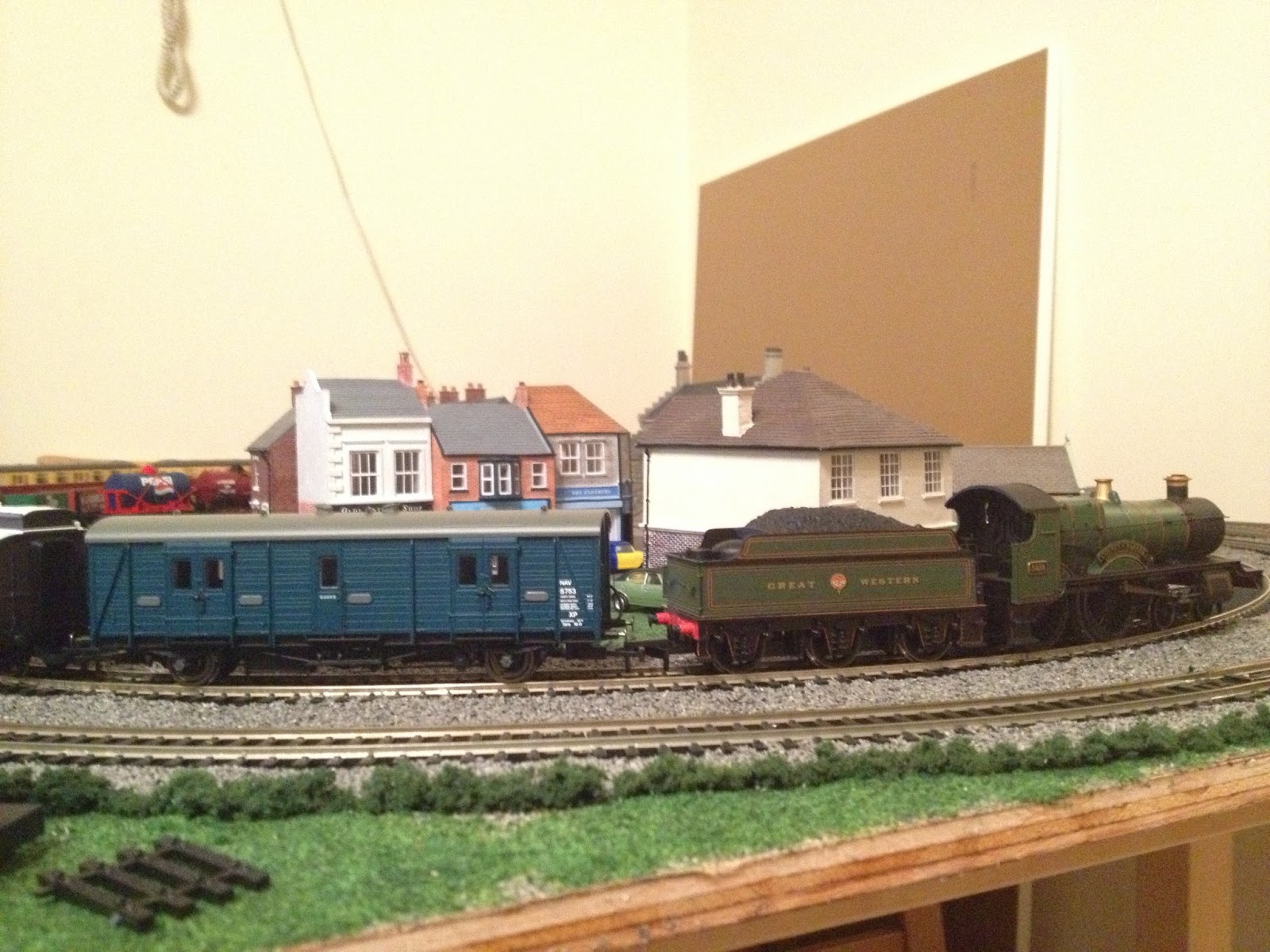 If you track back to Episode 2, you’ll remember I set myself the task, amongst others, that my layout should be easy to set up and set down. This was, at the beginning, achieved successfully. However as I’ve done more, and added scenery and buildings that can be plopped down the set up and set down time gets a little longer each time. In reality there is never going to be a fast and easy solution to setting up and setting down any model railway that isn’t a permanent fixture. Especially as in my case I’m quite particular in making sure all the trains go back into their correct boxes (must’ve inherited this trait from my Dad) and all the buildings are stacked such that they’re not going to damage each other in storage.

Now, this isn’t as big a problem as I’m making it sound. I actually quite enjoy the fact it takes a bit of time to get everything set just so. Equally as sad I also enjoy making sure everything is packed away in it’s appropriate place too, right down to putting the boards back in the cupboard; it makes me feel like I’ve successfully achieved some of my targets of this project.

What I will say is, that because setting up and setting down is a now a more lengthy process I feel more obliged to get the layout out when I know I can dedicate a weekend, or a run of days off to its use and continued construction. One day, this will not be a problem when I hopefully don’t have an as busy flat and have maybe some more space at my disposal. It would be really great to have something much smaller that doesn’t need a weekends dedication...

Don’t get me wrong, this is not an abandonment of my original project by any mile, quite the contrary, as I have some updates for you on that front from what I have worked on recently. This side project is also a chance to explore making a more of a model scene, rather than somewhere to enjoy running all the various trains I like. By this I mean there is more potential in a smaller shelf layout to explore things like setting, era and theme. After all, on an end to end layout it’s not possible to set a train going purely for the enjoynment of watching it run. The enjoyment in a shelf layout is different - there’s scope for operational planning, shuffling wagons about mimicking real life scenarios.
So here we go, rather than taking months to tell you where I’m up to on this project, most of the techniques I have already done so rather than taking months to explain where I’m up to, I will update you more swiftly…

Here’s the design. I agonised over this for quite a while, and maybe there is scope for a separate blog of how many versions of this plan I went through until I got to this one…

It will feature:
*Fiddle yard is a term used by model railwayers to describe a set of sidings or track out of sight from the rest of the layout. They are usually un-landscaped and hidden in such a way to maintain the illusion of a setting for the rest of the model. 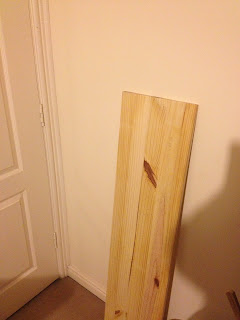 A trip to B & Q and I come back with this. It is, rather unsurprisingly, a 120cm x 30cm pine untreated shelf. (Shelf being a key word remember). This will act as my baseboard. 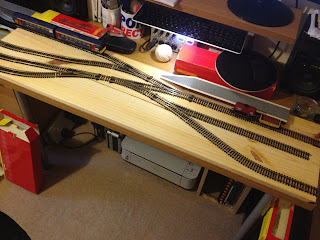 The track fits on it thussly…

You’ll be wondering why these dimensions?

My desk is exactly 120cm long, as is my coffee table (nearly). It’s also relatively small and inoffensive so storage is going to be no problem at all, but it’s going to be easy to move about and I can plonk it in more places when in use. 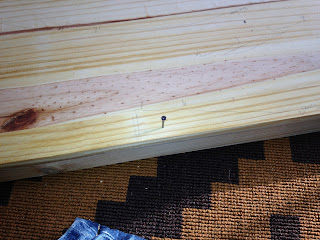 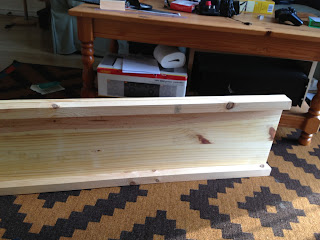 This time I wanted to explore the use of motorised points. Therefore I’ve raised the baseboard up by putting it on a ‘frame.’ And by ‘frame’ I mean two pieces of strip wood. I nailed the shelf to these. 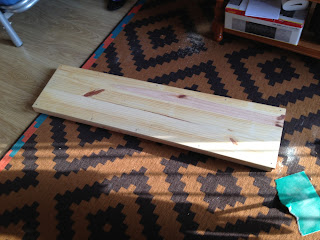 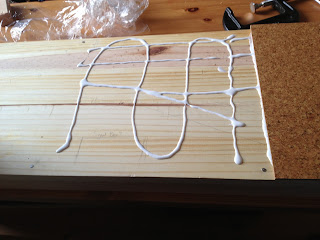 I can confirm that pine will accept track pins with ease, as will it accept drilling: to come later…

I have however elected to lay down some cork on top of the baseboard which will hide the nails of the frame and also provide a uniform surface for everything else going on top.

Some modellers will find proper cork sheets. Me? I’m using floor tiles. They’re even slightly laminated which will later prove helpful when sticking things to it… They’re also rather brilliantly (roughly) 30cm x 30cm meaning I’m not going to have to cut a great deal!

PVA glue (100% as opposed to a mix with water) will do just fine here. 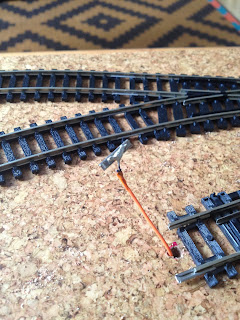 This time, whilst laying the track, I have drilled holes as I go for track power supplies and points. A good tip I picked up on the forums was to pre solder power supply lines to the fishplates, this will help you not melt the sleepers as I did in my other layout…

This partly worked… It would have worked better if I wasn’t using utterly rubbish solder but it did involve snapping off a bit of sleeper from some track which you’ll see in following photos. 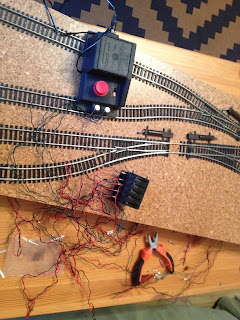 Once this was all complete I added some point motors.


Now, I could take up a whole blog talking about point motors. They come in a variety of flavours and costs. Most modellers will opt for something that is fitted underneath the board, some even go the whole hog with wires and pulleys mimicking signalling systems of days gone by.

As this is my first go, I’ve opted for surface mounted point motors. Peco PL-11’s to be precise. They are really simple to fit - simply latch onto the side of your point and nail down. A small hole will be required for the wires to disappear under your board. (Hence the frame). Most modellers will opt for something more discrete but this is my first attempt after all.

Again you can go and get really cheap switches but I’ve elected to get the more expensive Hornby ones. This was in part because they give a much nicer, and more authentic, signal cabin lever experience but partly because they are much easier to wire.

I could go into much more detail, and maybe I will do a dedicated post about the point wiring  at some point, but essentially for PL-11: You connect the red and black wire to the switch. These dictate which way the point sets. You then connect all the green wires (these are your commons) to one side of your power supply. The other side of the power supply feeds power to the switches. In the above picture, this one is brown, but it quite hard to see.  Again, I will properly explain this all at some point. There are also good places to go to explain how to do it… Like here…

Rather excitingly, all the points worked straight away! Very pleased with myself. 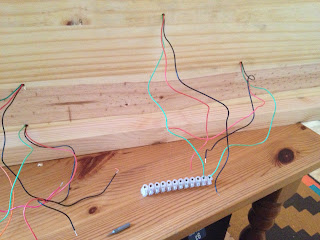 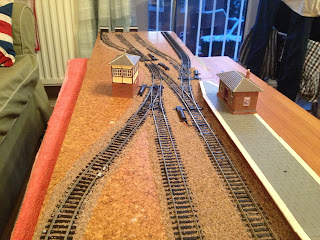 Next up it’s time to start adding some ballast. Check out This Episode for a more detailed breakdown.
I’ve used a slightly different colour than before. I’ve also stuck down the platform and buildings here using some super glue. 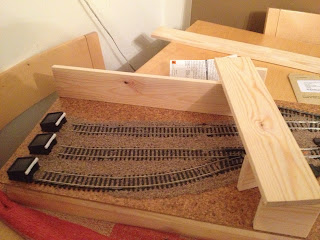 After another trip to B & Q, I’ve obscured the fiddle yard using some strip wood. I’ve also taken the opportunity to build a bridge for some added scenic interest. (I’m going to talk more about the decisions I’ve made on the landscaping in future blogs).
Another view, the mainline disappearing into the ‘tunnel’ on the right. Cleverly hidden by the strip wood. 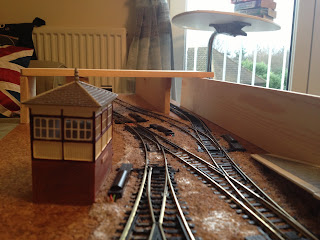 And that’s where we’re up to! 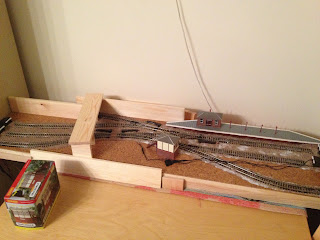