Side Tracked 1: Getting Ideas

Like me, you may well have a grand idea or vision of how you want your layout project to turn out. Even so, it’s a good idea to go and get some inspiration from other modellers and their layouts to see how they are doing things. After all, as we’ve seen so far, there are at least a handful of different methods for pretty much every aspect of your project. From scale to scenery from stock to track plans there’s such a sense of never ending possibility. This is good, mostly, but I find being inspired by one or two ideas gives a bit of focus.
Where can you be inspired?

Well taking a journey by train will certainly help, but I’m assuming at this point that you probably do this pretty frequently, or have done pretty frequently in your life. Needless to say if you’re modelling your layout on a modern era with modern stock, actually this is a very good idea. Secondly there are a range of publications and magazines to check out, and naturally lots of online content, you tube etc. But I don’t think you can quite beat going to an actual exhibition!
So I did just that at the Epping Railway Circle Exhibition in Theydon Bois this month. Why this one? Because I remember going to their exhibitions when I was young, and remember being impressed as a young boy with their layouts. That and it was near my house. 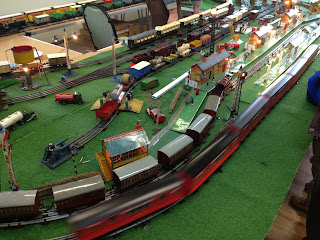 On display were 10 layouts which ranged in scale and theme. This is a pretty good reason to go to an exhibition, especially if you’re at the start of your modelling journey – it’s like an advertising exercise for all the different types of scales out there. The example above is a Vintage O Gauge (1:43.5) layout by Terry Isherwood and associates. It’s also a testament to the argument of not having to nail down your layout whilst still maintaining something that very much looks the part and good fun to operate.  Portable yes, but in the case of O Gauge you’ll need a fair amount of space for something on this scale. Another good reason for going to an exhibition is the sense of a local flavour. This manifests itself in the Epping Railway Circle with the inclusion of plenty of London Underground stock and themed layouts alike. As an R Stock train wizzes round at the bottom of the picture. 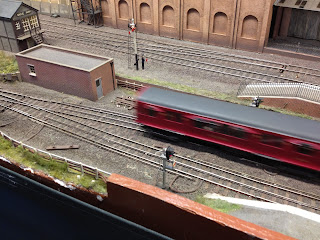 The same stock this time in EM gauge on the layout ‘Grove Park’ by Enfield MRC. Modelling the Underground gives the opportunity from some really interesting detail. 3rd and 4th rails and their power supply, line side cabling etc. All done impeccably well. 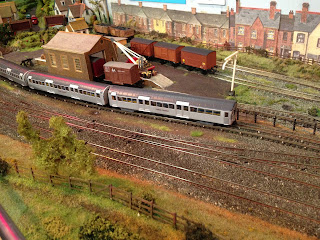 Another fine example being Tanglewood Common from the ERC themselves (This being their main layout). Set in a fictitious outer London suburb which probably has inspiration from real locations such as Epping, Amersham and Upminster where Underground lines used to (or still do) share tracks with national rail lines. 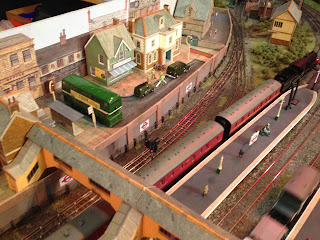 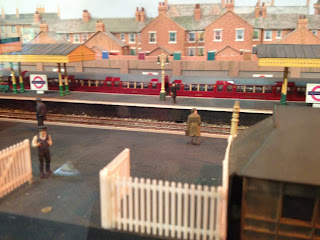 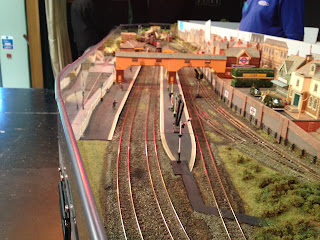 More shots of Tanglewood Common which also features rolling hills and fields as well as the main townscape. 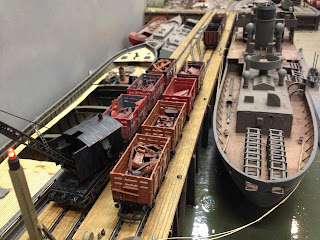 Not everyone goes for the countryside theme though. Columber Wharf an OO layout by Chelmsford MRC is a fantastic example of not only era specific but genre and theme specific with this model of a dock/scrap yard. 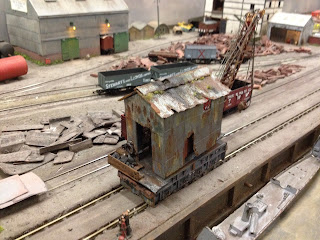 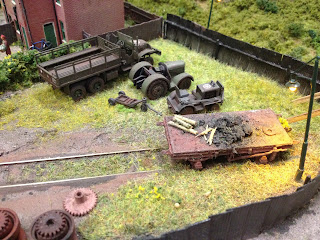 …this rather abandoned looking flatbed wagon… 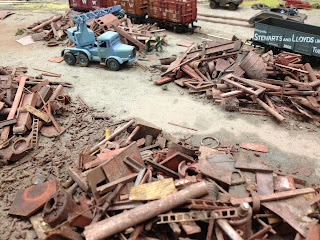 …and some of the scrap itself. Flickering LED’s were used to mimic people welding or rather pulling apart scrap metal, which added a nice finishing touch. 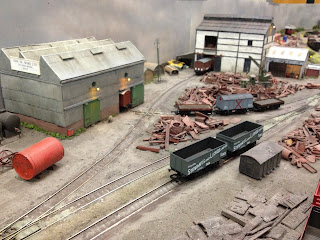 A scrapyard scene perhaps not everyone’s vision, me included, but hats off to the level of modelling here. Look at it long enough and you might believe you’re actually there. Again this is an example if you want to do a ‘theme.’ A dockyard is pretty good idea as it gives for lots of scope of shunting and loaded wagons but another good concept is… 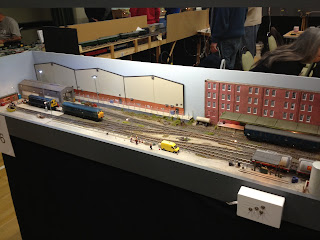 …the depot! Just as much scope for details and stock such as Slipe Lane from Peter Watson. The above two layouts open up the possibilities to something I’ve not really explored thus far and that is end-to-end layouts. With Tanglewood Common and my own layout (names on a postcard please) there is potential to leave trains running and to let the efforts of your modelling soak in. However with these end-to-end offerings you get the chance to really get stuck into the nature of an operational railway as you bring trains in and out of service and shunt stock into sidings. It’s also really very simple and effective. Everything is within arms reach (should you not have automated points yet, naturally this does), there’s not miles and miles of expensive track and you’ve created something that looks excellent in a very small space. It’s a concept I definitely want to explore in the future based on watching Slipe Lane.
Slipe Lane also offered up an insight into Digital Control. As aposed to analogue (which is what I have), simply a potentiometer connected to the track for ‘more and less’ voltage/speed and a switch to reverse the flow that’s pretty much all you get. With Digital (or DCC) you get far more scope for train control. You can have multiple trains on one line and program locomotives to start and stop automatically and accelerate or decelerate at pre-determined rates.  What’s more you can add sound and lighting to locos (some come with it pre-installed) and DCC can also control points, signals and even coupling from one control surface. Now this was my first time seeing a DCC layout with all these aspects featured. Previously I’ve been very sceptical about the need for model locos to have sound and all these fancy bells and whistles. I’ve always thought that a model steam train with synthetic ‘puffs’ and ‘hisses’ would just look and seem tacky. Well Slipe Lane gets the use spot on. Because the layout is themed on a Diesel depot the locos make (obviously) Diesel noises, engines firing up and revving into action, the sound of the horn and the sound of scraping wheels on curved track. This works in a way synthetic sound on steam trains doesn’t. The noise of a steam train is also associated with seeing…... steam! So for me when you don’t see any steam, the sound seems much more noticeably fake. With the Diesels, minus a bit of exhaust smoke, it’s believable that they’re actually making that noise. And this for me was brilliant.

On a lengthy discussion with one of the ERC members, I agree that if you’re going to do sound on your locos you have to do it properly and make sure all the locos have it. It doesn’t mean you shouldn’t opt for DCC though, it’s still incredibly powerful and I would definitely say that if you’re starting from scratch this is the future. For me, I’ve just got far too much of the old kit to get involved with it just yet. But good news, you can get decoders for existing stock. But that’s something for another day. 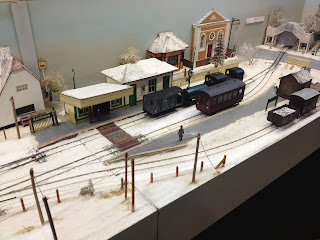 Here’s something slightly more alternative. Another end-to-end layout, but this time a narrow gauge line in O. This is Hayesden by Tony Martlock. I like the concept, scaling everything down from life size and then scaling it down again within the scale. Clever! I also like the wintery theme. Again, it breaks the mould from the usual countryside/town image. I imagine depicting a snow theme such as this is brilliant in the sense that everything has to be simply covered in white, be that scatter, paint or your medium of choice. But on the flip side… well everything has to be covered in white… you have to make sure your weather has happened uniformly after all! But I like that some of the wagons in the yard appear to have more snow in/on them – implying they’ve been lying around for longer than the main line stock adding realism. 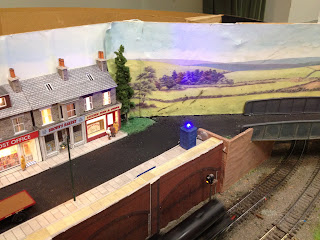 Finally I think modellers like a gimmick or two, or an easter egg if you will. This could just simply be a normal Police Call Box on the Redford by Mark Smith layout, but I definitely think it’s the tardis from the way the light was going on and off….

It might be easy to become disheartened at an exhibition of this calibre, but remember these layouts have been years in the making with some seasoned people at the helm. I was offered some good advice by one of the ERC members… ‘Model for you.’

It’s your layout after all so run what you want, it doesn’t have to be a theme or an era but hey! If dockyards or the Underground is your thing then why the hell not?! Model to a level you’re comfortable with and build on it. You can achieve some great results by not overly complicating things as seen above and like me an exhibition will definitely give inspiration into this. 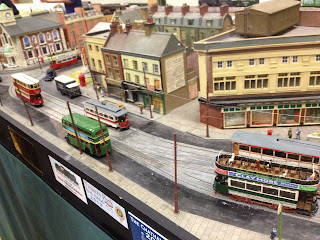 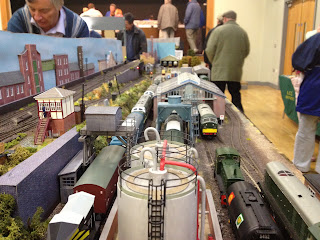